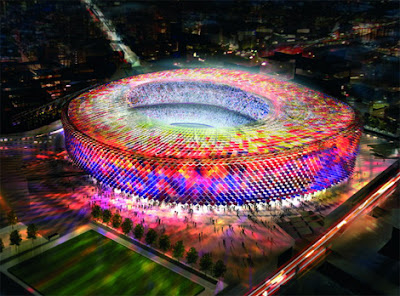 "Blue and claret blowing in the wind
One valiant cry
We’ve got a name that everyone knows:
Barça, Barça, Baaarça"!

Experience the thrill of walking around one of the most successful club stadiums in the world FC Barcelona. Walk in the footsteps of the all time greats. See where Messi and all the superstar team play. A tour that is "not to be missed" while you are here for the MWC.

Things you will see on the tour:

The Camp Nou Experience has become an obligatory stop for visitors to Barcelona. The Experience gives you the chance to walk through the most emblematic areas of the stadium: the away team changing room and the players’ tunnel, the dugouts, the press room, commentators box and of course the Museum. The Museum is the most modern football museum thanks to its interactive wall spaces,

History of the Stadium

It was still not big enough to cope with the surging interest in the team though, especially after the arrival of Hungarian superstar Ladislau Kubala and the new Barça stadium was built to replace it.

The stadium was designed by architects Francesc Mitjans Miró and Josep Soteras Mauri, with the collaboration of Lorenzo García Barbón, and it was constructed between 1955 and 1957, using mainly concrete and iron. The whole project cost a staggering 288 million pesetas, which meant the club would spend the following years in heavy debt. 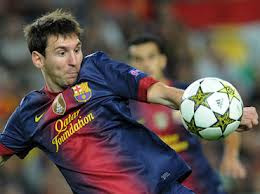 Although it was originally going to go under the official name of ‘Estadi del FC Barcelona’, it soon came to be popularly known as the 'Camp Nou' (the ‘new ground’), as opposed to the club’s old home at Les Corts. It was not until the 2000/2001 season that, following a mail vote made by the club membership, that the decision was made to make ‘Camp Nou’ the official name of the stadium. Of the 29,102 votes the club received, a total of 19,861 (68.25%) preferred Camp Nou to Estadi del FC Barcelona.

The stadium’s maximum height is 48 metres, and it covers a surface area of 55,000 square metres (250 metres long and 220 metres wide). In accordance with UEFA stipulations, the playing area has been downsized to 105 metres x 68 metres.

With a capacity of 99,354, it is now the biggest stadium in Europe. However, the total capacity has varied over the years owing to different modifications. When it was first opened in 1957, it held 93,053 spectators, which would be increased to 120,000 in 1982 on occasion of the FIFA World Cup. However, the introduction of new regulations outlawing standing areas reduced the stadium’s capacity in the late 1990s to just under 99,000.

In the 1998-99 season, UEFA recognised the services and functionalities of the Camp Nou by awarding it five star status. In the whole of Spain there are only four other stadiums that can claim that, the Lluís Companys Olympic Stadium, also in Barcelona, the new Cartuja Olympic Stadium in Seville, the Vicente Calderón, home of Atlético Madrid, and the Santiago Bernabeu, also in Madrid.

If you need Football Tickets for any of the FC Barcelona matches then they are available HERE.

PRICE PER PERSON: Price on Application

LOCATION
Camp Nou Stadium, North of the city
DURATION
Approx. 2 hours
AVAILABILITY
Fixture list can be provided
PARTICIPANTS
From 2 to corporate groups of 30 or more
WEATHER
Not affected
WHAT TO WEAR
Barcelona scarf highly recommended!
ADDITIONAL INFO
Camp Nou Stadium and Museum tour is highly recommended. We can arrange this for you, together with transportation, if required

Just a 30 minute drive inland, from Sitges is the Penedes region, famous throughout Spain for some...

Corporate Team Building Activities, Retreats and Venues in Barcelona, what are they and how can they help...